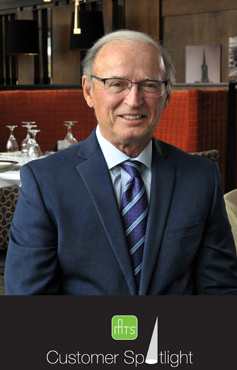 As the president and CEO of Mainstreet Ventures Inc. (MSV), restaurateur Mike Gibbons will soon be opening his 20th restaurant. Mainstreet Ventures restaurants are located in five different states and are built around 10 different concepts. But, no two restaurants are alike — they are all designed for the specific communities in which they are located. For example, one of their newest restaurants — The Chop House on Toledo’s riverfront— features an elegant contemporary design while The Chop House in Ann Arbor, MI has very traditional décor. According to Mike, with MTS, seating for any design style they choose is not a problem.

Gibbons has been a longtime fan of MTS Seating. About 15 years ago, he was having problems with the chairs in one of his Florida restaurants — they kept breaking. He thought it might be humidity causing the problem. So, he called a friend who said that he needed to consider a metal chair and that MTS Seating was the hospitality seating company to call. “Since that day, I have never bought another brand of chair,” stated Gibbons.

Mike works with the Design Collective, a group out of Columbus, Ohio, for the interior design of all his restaurants. They know that he only wants to use MTS chairs and barstools so they work with MTS to select the style, frames and fabrics. They have a great collaborative relationship with MTS and the selection is endless. “A chair in a Chop House might look different than a chair in an Italian restaurant and MTS has it all,” stated Mike. “And, the chairs don’t wear. I can never think of having to replace a chair in 12 years.”

His accolades are many and include: Northwest Ohio Entrepreneur of the Year by Ernst and Young, and Honorary Faculty Member at Michigan State University. He was twice awarded an Honorary Doctorate in Foodservice from the North America Association of Food Equipment Manufacturers and he is a Fellow at the Culinary Institute of America. And this is just the tip of the iceberg.

Mike is also extremely community focused. The National Restaurant Association has awarded Mainstreet Ventures the Good Neighbor Award for their annual Thanksgiving Day dinner. The Real Seafood Co., in Toledo, works with local shelters and serves 1,600 people in the restaurant, or in their homes, on Thanksgiving Day. According to Mike, it’s about the ambiance — inviting people to come to a restaurant setting that they won’t get any other day of the year. They are sitting down, served a great meal in a great environment. And, we love doing it.”

His final word on MTS, “As long as I’m in business, I’ll be using MTS chairs. They last.”